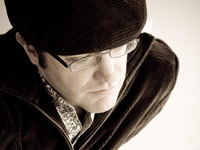 The New Music Society opens its 2011-2012 season, “The Year of the Piano,” Wednesday, October 12 with a short noon hour concert in the Butler Institute of American Art’s Beecher Court and a second longer show the same evening at 8:00 p.m. in Bliss Recital Hall. Both concerts will feature guest artist Matthew McCright, a specialist in performance of contemporary music. McCright resides in Minneapolis, Minnesota, is a piano faculty member of Carleton College, and maintains an active career as a soloist and chamber music performer. He has performed in this latter capacity throughout the United States, Europe, Asia, and the South Pacific. He has premiered numerous works working with many noted composers, some of whom have written pieces especially for him. McCright has also appeared in concert in major music festivals including Dublin’s Printing House Festival of New Music, Britain’s Late Music Festival, downtown New York’s Bang on a Can Festival, and Duquesne University’s Summer Music Institute in Pittsburgh to name a few.

McCright, who was born in western Pennsylvania, earned his Bachelor of Music in Piano Performance Magna Cum Laude from Westminster College studying with Dana alumna Nancy Zipay DeSalvo. He holds a Master of Music in Piano from the College-Conservatory of Music at the University of Cincinnati, and his Doctorate in Piano from the University of Minnesota. He began his career as a traditional recitalist and concerto performer. Composer Ensemble director, Robert Rollin first encountered him as a soloist with the Greenville Symphony. Rollin reviewed the performance for the Vindicator and was very impressed with McCright’s talents. McCright subsequently specialized in New Music.

McCright has chosen to perform Blue Fantasy by Dana faculty Robert Rollin, three movements from It takes a long time to become a good composer by Timothy Andres, and the substantial four-movement Sonata for Piano by Polish composer Witold Lutoslawski. During his residency McCright will also meet with student composers to read and critique their compositions.

The two concerts will also feature several world premieres by area composers. Senior Carol Ann Smolka’s piano work Helen at the Water Pump will be performed by Robert Rollin, who, in addition, will accompany Smolka in her song A Prelude for the Morning. Local composer and New Music Guild, Inc. member Richard Zacharias will hear both his Second Romance and Consolation (the latter a world premiere) played by graduate student Allyson Oyster. Oyster herself will hear the world premiere of her Dialogue for Two Flutes. Freshman Michael Lynch also will attend the premiere of his Duet for Two Flutes. A student flute quartet is featured in the premiere of Samantha Hogan’s “Clowns,” the first movement of her work-in-progress, Hell’s Carnival.

Two additional works will enhance the programs. Senior tenor Neil Meloro and graduate student Andrea Dreier will present the song, What You’d Call a Dream by Craig Carnelia. This work has an unusual and personal depiction of baseball. A Dana student brass quintet will perform an arrangement of Erskine Hawkins’ Tuxedo Junction. This piece was originally released by the Hawkins band in the late ’30’s, and was taken to a number one hit by the Glen Miller Band in 1940.

Both concerts are free and open to the public.