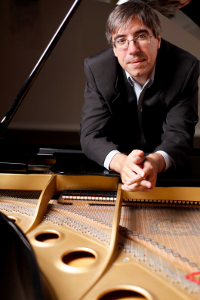 Avguste Antonov was born in Bulgaria, lived 10 years in France, then moved to the U.S. where he continued his training at the University of Kansas and Texas Christian University. He has an active career as soloist specializing in 20th and 21st Century music giving recitals in France, Kansas, Iowa, Missouri, Florida, Pennsylvania, Texas, and Ohio. He has premiered many new piano works and has worked with such composers as Carter Pann, John Mackey, Robert Rollin, and Michael Colgrass among others. Antonov has also appeared as soloist with the University of Kansas Symphony, Kansas City Medical Arts Symphony, University of Kansas Wind Ensemble, Hardin-Simmons University Orchestra, and San Jose Wind Symphony. He teaches at The Master’s Touch School of Music and Performing Arts in Grapevine, Texas, a suburb of Dallas.

Several Dana composition students will hear premieres of their works. Senior Carol Ann Smolka will sing her latest two songs: “I Am Yours,” and “Dying to Survive,” accompanied by graduate student Allyson Oyster. The two will also present Allyson Oyster’s Psalm 47:1. Sophomore Jesse Martin will perform his own Two Etudes for piano, and will also hear his String Quartet No. 1, second movement. “Clowns” the first movement of junior Samantha Hogan’s Hell’s Carnival, will be premiered by a student flute quartet. Her Thoughtbox for trombone and piano will also be played by Dana faculty trombonist John Olson accompanied by Jerry Rezanka. Cory Davis will perform his piano piece titled With Nothing Left.

The last of the four concerts will take place 2:00pm Sunday, December 4 at Ss. Peter and Paul Church on Covington Street in downtown Youngstown. The audience will have a last chance to hear Antonov perform a few of the contemporary works listed, as well as piano music by Franz Joseph Haydn and Franz Liszt.

All concerts are free and open to the public.

7:00pm Monday November 28, 2011 • Meeting of the New Music Guild, Inc. in the Dean’s Conference Room, Bliss Hall. We will be electing officers and discussing the upcoming Annual Fall Concerts with Avguste Antonov. Refreshments will be served.