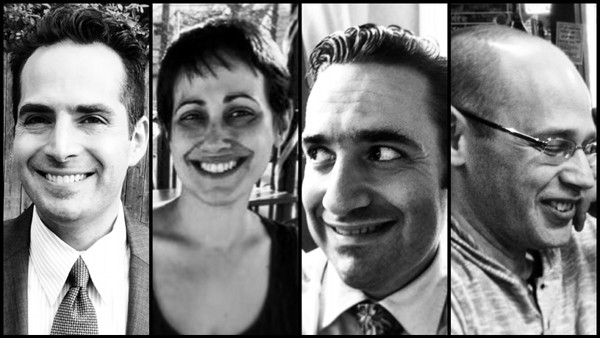 On September 4th and 6th, 2015 The New Music Guild, Inc. will kick off its 2015-2016 season with a two-concert residency by the Howard Report (a.k.a. the Howard String Quartet). The members are siblings from the same Steubenville, Ohio family and have played together for many years. The group consists of four string-instrumentalists all of whom performed in the Dana Symphony Orchestra during their years at Youngstown State University. All four are also composers and have played in the Festival Chamber Orchestra of the New Music Guild, Inc. for 21 years.

Ethan Howard is the first violin and has directed the Steubenville Schools String Program and Orchestras for over a decade. Second violinist Esther Howard studied both English and Music at YSU and is also a poet. Jeremy Howard plays viola in the group and has specialized in experimental music. Cellist Jason Howard holds a PhD in Music Composition and Theory from Kent State University and teaches Music Theory at Westminster College in Pennsylvania.

The Howard Quartet specializes in 20th and 21st Century works and will feature music by its own members and by other composers. The group has a variety of interests and will play works in classical, popular, and improvisatory genres. Ethan Howard will hear his arrangements of Sting’s El Tango de Roxanne, and Jimi Hendrix’s Purple Haze. The ensemble collectively arranged Gerald Marks’ and Seymour Simons’ All of Me (1931), and trombonist Juan Tizol’s Ellington Band classic, Caravan.

The ensemble will also play Dmitri Shostakovich’s String Quartet No. 8, Opus 110 (1960). Written in Dresden, Germany in just 3 days, the piece was published with the inscription “to the victims of fascism and terror.”

Esther Howard’s contribution will be the more classical Woluhd. Jeremy Howard’s Lilies of the Fields, Ambient Cut (Techno Starship, Psycho Air Waves), and Caprice 6 will all receive their World Premieres on the concerts. Jason Howard’s String Quartet No. 1, a romantic piece, will be performed. His String Quartet Nos. 6 and 7 will be premiered. 6 began as a sonorous exercise to challenge cellos and gradually evolved into a quartet. 7 began as a wedding gift to his wife Kay and became a musical expression of love.

The first movement of Dana Emeritus Professor Robert Rollin’s String Quartet No. 2 (2010), subtitled, Lyric, will receive its American Premiere at the concerts. It is an adaptation of the composer’s setting of William Butler Yeats’ Down by the Salley Gardens for baritone and chamber ensemble.

Admission to both concerts is free and open to the public. The September 4th concert will be at 7:30pm in Bliss Recital Hall on the campus of Youngstown State. The September 6th concert will take place at 4:00pm in Ss. Peter and Paul Church (Holy Apostles Parish, 421 Covington Street) in downtown Youngstown. There will be an after concert party with refreshments in honor of the Howard Quartet.

Through partnerships with the Dana School of Music, the College of Fine and Performing Arts, Youngstown State University, and local community and government leaders, the New Music Society has showcased thousands of amateur and professional compositions — all while focusing efforts to ensure the future of this phenomenal creative organization.
View all posts by dananewmusic »

Posted on August 23, 2015, in News and Events. Bookmark the permalink. Leave a comment.